Should Hoobler Airlines be canonical?

The Front Counter is the main place for general Adventures in Odyssey discussions. Grab a Loc-Kno-Stra-Mal, and talk it up!
Post Reply
3 posts • Page 1 of 1

Should Hoobler Airlines be canonical?

In the beginning of the "This is Nick Grant" storyline, you can see Connie and Jules' plane tickets say "Hoobler Airlines".
I know that this is a nice little reference to one of the odyssey team members, but should Hoobler Airlines be a canonical part of Odyssey? 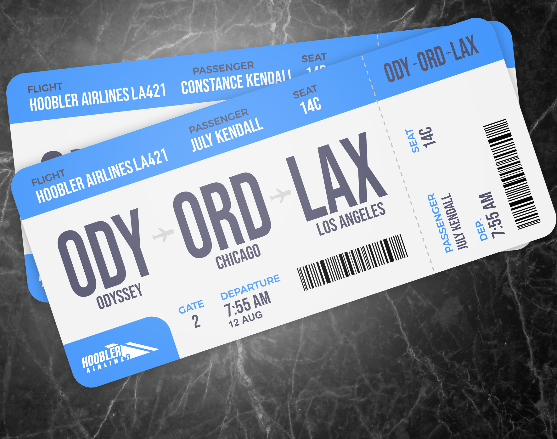 Re: Should Hoobler Airlines be canonical?

It is a deviation from the real world, so from the perspective of keeping the AIO world as closely aligned to ours as possible, it isn't desirable, and you might say it 'shouldn't' be canonical. However, using a fictional airline might have been a forced decision, since it seems that using a real one would likely infringe on some company or another's trademark.

Once you've decided to use a fictional company, the difference between "Hoobler Airlines" and a close imitation of a real airline ("Columbian Airlines", "Union Airlines", "Upsilon Airlines") seems mainly a stylistic point. I would prefer to see the latter, but other fans may prefer the former. Using the name of a crew member is safer in terms of avoiding legal trouble, although not as clever as a good real-world reference.

As far as whether the reference is canonical - if we accept that the "Nick Grant" storyline is a part of canon, we're compelled to accept the existence of Hoobler Airlines in the AIO world. Nothing that I'm aware of in AIO canon would preclude it from existing.
A classic never goes out of style.
Top

Re: Should Hoobler Airlines be canonical?

Hmm, interesting thought. I do have opinions on the "byte-sized adventures" storylines which the AIO Facebook page has been doing, but that's another topic for another time.

When I initially saw the name, I just took it as a new addition to the many fun references that we see made to the Odyssey crew in AIO. We’ve seen this before. In the episode “Happy Smilers”, in the background of one of the hospital scenes you can hear the name “Dr. Crowe” being called on the intercom, referencing sound designer Jonathan Crowe. In the episode “The Vow”, when Chris does the intro, she reads from a magazine/book put out by the “Phlollar Press” publishing company, reference to AIO co-creator and writer Phil Lollar. I personally wouldn’t mind Hoobler Airlines being mentioned in an episode and adding on to our list here.

However, whenever I look at the word “canonical”, what comes to mind for me is the action of not only merely existing officially within a franchise but the very the object playing a major role within it. I think, taking it a step further, it would be cool if Hoobler Airlines made an actual appearance in an episode. We can have an episode where Wooton and Penny travel somewhere and the airline they use is said to be Hoobler Airlines. They enter the airport and have the usual experiences one has when traveling, whether it be delays, lost luggage, airplane food, people reclining their seats in the airplane, watching movies, or the plane ride being bumpy. Of course, there would be a little more plot to it than that, but I can see a portion of the episode can be about the airline itself and its services. Then in future episodes Wooton and Penny can recount their experiences of Hoobler Airlines to the folks in Odyssey.

Wow, that was a lot. Overall, I would definitely be in favor of Hoobler Airlines making an appearance in the audio series.
-Signed, PolehausFifty-three