by Tea Ess
I know we've already had discussion regarding the upcoming election, but I thought it would be nice to have a more generalized thread that included political quizzes. It's fine if this ends up having to be moved to the Debate Hall, but I thought it should at least start in general discussion. Feel free to post your own results from any political quiz, or post about the various parties or candidates. Here's a few quizzes I've found insightful: by Wretched Sinner
As a Canadian, here are my results: by GJFH
I don't find this surprising. I'd prefer if Hillary was a lower number though.

by TigerShadow
I'm a right-wing libertarian? Shocking, given that my stance on government can be summed up in this quote from Fred Weasley: "Keep your nose out if you like it the shape it is. Can't see why you would, but—".

Huh. I'd never heard of McMullin. I've been hearing so much about Trump, Clinton, Johnson, and Stein that I didn't even realize there were two other people running. (Which reminds me, I really need to apply for an absentee ballot.)

by Blitz
And here you go. I pretty much came out how I thought I would. 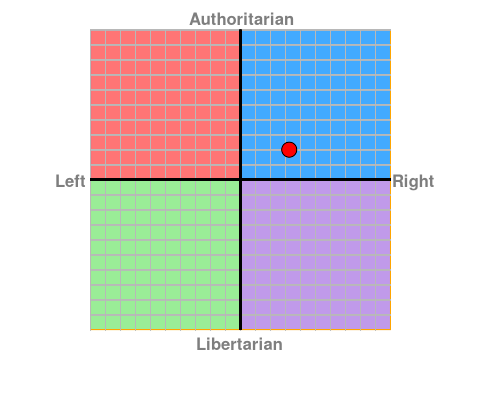 by Tea Ess
Here's my ISideWith results. I was surprised that I matched with both Johnson and Clinton on foreign policy. This is mine. I cant remember how to put my pic on, so I just posted the link. I wish the Hilary clinton was 0%, 6% is better I suppose

by AuntSarah
http://www.isidewith.com/elections/2016 ... 2578996409 here's mine and it doesn't surprise me I was thinking that if I HAD too pick between Trump and Hillary I would pick Trump (but I don't really like eather of them good thing I am not old enough to vote yet)

"You side extremely towards “Pacifism”, meaning you very strongly believe we should use non-violent diplomatic discussion to resolve conflicts. This theme is more important to you."

You could say that again xD

I side 88% with Evan McMullin, and am libertarian, with slight right-wing leaning

by Audrey
I did this forever ago and if I remember right, I was equally tied with Bernie Sanders and Hillary Clinton at around 87% each. Donald Trump was at around 45%, probably because I tend to lean socially democrat but fiscally Republican. It wasn't really a surprise to me. ¯\_(ツ)_/¯

Just curious (not for this to turn into a whole debate or anything), for those of you who dislike certain candidates (I know AuntKate said she wished her Hillary percentage was 0%), why?

by Miss Friendship
Yeah why is it awful to agree with Hillary on something? @GJFH and AuntKate

by GJFH
It really isn't awful, I'm not sure what we'd agree on though.

by TigerShadow
When I took the quiz, the results showed me what issues I sided with that candidate on. Did it not say that for you, too?

by Jo March
@Miss Friendship and Audrey: Because she stands for basically everything I and my family stand against. If she is elected, she will most likely turn the US into a Communist country-- the government controlling everything. That is EXACTLY what the founding fathers did NOT want. That is my opinion, and I am sticking to it. (who was it {in AIO} that said that? I think it was Alex Jefferson, if my memory serves me correctly.

She's a terrible person, slimy politician, but she's just a run-of-the-mill democrat in my opinion, and in fact not liberal enough for some people, as you can see by Bernie Sander's success.

Anyways, back on topic, I also took the On the Issues test, and I agree with Obama and Hillary about 50-40%, and Gary Johnson at about 42%. Not sure how that factors in with the other quizzes putting me as a right-leaning libertarian but I guess that's how it is

by Shadow
SirWhit, that is SO true. I nick named Hillary, "Hitlery".

by TigerShadow
I find that interesting, given that if we're going to follow Godwin's Law and compare anyone to Hitler, it would more likely be Trump, whom a number of Holocaust survivors have stated reminds them eerily of the demagoguery of the Nazis' rise to power.

by Bob
I took OnTheIssues earlier (I like it better than Political Compass).